One of the most trying cases we’ve faced at RVR Horse Rescue was of tiny Warrior, one of four mini’s rescued in 2012. Warrior was starved by his owner, as we’ve unfortunately seen before, but his story went public and resulted in serious political backlash for RVR.

The case dumped an enormous amount of stress on our devoted team, but we overcame the adversity, banded together stronger than ever, and continue our relentless fight for equines in need.

Nearly four years later, Warrior’s spirit is still alive to those he inspired in his final days.

An RVR fan, Charles, proudly announced the recent birth of his new foal, named Warrior. Charles stated, “Name is in honor and memory of a precious foal in 2012. Shawn Jayroe, this is for you and RVR, horse angels.”

Our original Warrior was too far gone to be saved, but now his name will live on in another beautiful mini! 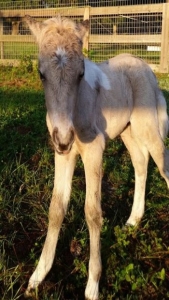 The following excerpt from “A Healing Haven – Saving Horses and Humans at RVR Horse Rescue” describes the details of our original Warrior’s story.

“One of our most significant cases began when a local veterinarian was called to euthanize a horse in Plant City that had supposedly fallen off a porch. He immediately became suspicious about the claim when he arrived at the property. Of the four miniature horses there, all were in various stages of starvation and neglect, but two were far worse than the others. The vet refused to put down the horse, but called us instead.

Little Warrior hovered at death’s door. The horse that had supposedly “fallen off the porch” had actually been starved to the point of collapse. He simply lay motionless on the ground.

I’ve been rescuing horses for so long that I think I’ve seen it all, but sometimes the human capacity for evil still astounds me. Every case of clear neglect and abuse angers me, but I was enraged when I came on this horrific scene. Warrior had been tied on a patch of sand where he’d crumpled. No food, water, or even grass were within his reach. He was tiny. Miniature horses are normally fat little butterballs at 350 to 400 pounds. Warrior weighed half that. His dark drab coat draped over his bones, showing every contour. It was tragic.

Unfortunately, we’ve seen too many cases of this type of abuse. What made this one even more detestable was this baby was losing his life only steps away from the owner’s porch. She literally had a front-row seat to watch him waste away to a slow, cruel death.

Miniature horses don’t require much food to keep their compact bodies healthy. A measly cup of food a day, or about $10 a week, is all it takes. Knowing how long Warrior endured the starvation just infuriated me. I can’t understand or accept the mentality of someone who can treat a supposed pet that way.

We had to threaten the owner with a criminal investigation before she agreed to surrender all the minis. There was no way we were leaving with any of them still in her care.

It was out of the question for Warrior to walk to the trailer, but four of us were easily able to lift him using a sling. He barely budged with the movement. His head perked up out of curiosity, but he was otherwise a pile of dead weight. Fear and confusion clouded his eyes, although he settled into the back of the truck quickly.

He warmly accepted the love and compassion we showered on him. I guessed that the attention and affection he received in those minutes once he was in our care were the most he’d seen in years.

We carted his buddies Spirit, Sandy, and Sandy’s colt, Lily back to RVR for their recovery as well, although none were as desolate as Warrior.

At the ranch, we dove right into Warrior’s treatment. His neglected hoofs had overgrown to the point of being ridiculous. They’d grown four inches longer than they should have been, making it nearly impossible for him to stand until the farrier clipped them.

He gobbled up the bits of hay we offered during his exam—probably the first food he’d eaten in a very long time. Our compassionate volunteers rubbed his back, kissed his nose, ran fingers through his black mane, and willed him to live.

His dim eyes were glazed over and he could barely move, but Warrior licked our outstretched hands and nudged them with his nose. He accepted the love we gave and reciprocated in kind. His previous owner had nearly killed him, but Warrior still continued to love.

The pathetic little guy was barely present. His abuse had gone so far beyond tolerable that he mostly just laid still. We worked in shifts, turning Warrior over manually every couple of hours. It took several of us to hoist him up and steady him on his feet. He could stand for only fifteen minutes at a time before he’d collapse from exhaustion.

After two days, we found another horse rescue, Beauty’s Haven, near Ocala, who had a sling small enough for Warrior. The sling would allow us to suspend him, but it meant we’d have to commute nearly two hours to maintain his care. But, as I’ve always seen, people stepped up to the challenge. After we transported Warrior to Beauty’s Haven, we spent another two days nursing him in his new upright position.

But it wasn’t enough. Fourteen-year-old Warrior lost his remaining shred of life only four days after his rescue. We had given our all despite the towering odds stacked against the poor boy.”

How you can help: 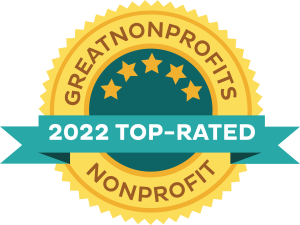 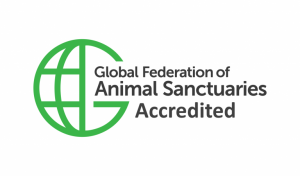 Into the Arms of Love
Scroll to top